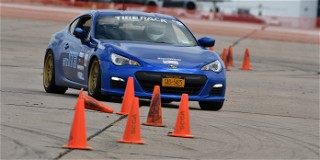 The 2019 Solo National Tour again opens at South Georgia Motorsports Park with the Dixie Champ Tour. A great atmosphere and fantastic BBQ make this a very well-attended event each year. From Georgia, the Tour slides north for the Charlotte Champ Tour that will run Friday and Saturday due to site restrictions Sunday. March then closes with the Texas Champ Tour at Mineral Wells Airport featuring a Texas-sized course layout!

June opens with the New York Champ Tour at Seneca Army Depot. Last year marked the return to this site after being away for seven years, and the huge facility delivered challenging courses and breathtaking scenery. Competition continues in June with the first Match Tour event of the year at San Diego County Credit Union Stadium, formerly known as Qualcomm Stadium. Alas, this venerable site is scheduled to be closed at year’s end, so this is very possibly the last chance drivers have to dance at this venue that has been part of SCCA Solo history for more than 30 years.

The combined Match Tour/Champ Tour date starts July at Bristol Motor Speedway in Tennessee. It will be a Fourth of July extravaganza punctuated with a big driver turnout and tons of Southern hospitality. Then it’s off to the Northwest for the Packwood Champ Tour at the picturesque venue near Mt. Rainier just one week ahead of the planned ProSolo® event at the same location. The 2019 “regular” season then closes in late July with the Peru Champ Tour taking place at a concrete, former military facility that has hosted the Solo National Tour 13 times and still holds the record for largest turnout with nearly 400 entries.

The schedule is subject to change, but the combined 2019 Tire Rack Championship Tour and Match Tour calendars currently are as follows:

Generally, Champ Tour events take place over three days on two separate courses. The opening day consists of Test and Tune opportunities, as well as a social gathering. Then on the second day, competitors each get three chances to drive one course, and on the third day get three runs on another course.

Match Tour competitions are three events in one package, with the event broken into four sessions. Session 1 and Session 2 are on Saturday and consist of a traditional three-run autocross. The best run from each session is added together to determine class rankings, and trophies are then distributed Saturday during the evening’s social event. Session 3 on Sunday is another three runs to determine qualifiers for the Top Dog and Under Dog Challenges. The top eight on index per heat qualify for the Top Dog Challenge, and those placing in positions 9-16 on index per heat qualify for the Under Dog Challenge. Everyone else is eligible for the drawing to be in the Lucky Dog Challenge. Then the Challenges take place in Session 4 of the event.

Like any other Solo competition, both Match and Champ Tour runs are timed to 1/1000th of a second and knocking a cone down means a two-second penalty is added to that time.