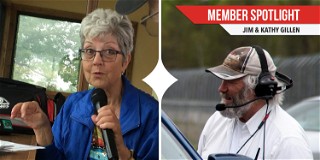 There are lots of excuses for not participating in the SCCA. There’s no spot for me, I’m not a driver, I don’t know what to do, I’m too young, I’m too old, I’m “too or not”… it doesn’t matter. None of them are true.

No one proves that more than the husband and wife duo of Jim and Kathy Gillen and the work they’ve done with the Land O’ Lakes Region.

Jim came to the Club in 2003 at 51 years old. The race fan was self-deprecatingly “too lazy and too cheap to run a car,” so he took the best seat in the house – flagging. This is a commitment for anyone, of course, but when you live in Minnesota, and Brainerd is (at the time) not operating… well, it’s an even larger commitment. Flagging meant eight to 10 weekends per year at Blackhawk Farms and Road America.

“It was a great training ground,” Jim said. “CenDiv has an excellent history and reputation for training, and I was the very lucky recipient of some excellent, experienced workers who helped me learn.”

No man is an island, of course. Kathy was busy with her business and road racing wasn’t an interest of hers. She encouraged him to go have his fun.

“Every weekend when he would return home from a race he was bubbling about how much fun he had, and he wished that I would go with him,” Kathy said. “So with the first event of 2004 I went with him to my first race, with the caveat that if I hated it he wouldn’t be upset, and he would let me curl up with a book while he played on corners.”

The savvy reader noticed the title – the one with both Jim and Kathy’s name in it – and has already rightfully deduced that she did not curl up with said book.

Kathy’s first assignment was station 6A at Road America. You know – top of the hill, near the bridge, with a view out of four, through five and “then accelerating like bats out of hell right at us at 6A. I get an adrenaline high every time I think about it.”

SCCA was no longer “Jim’s activity.” Far from it. And roles kept expanding.

Jim went first. He served on the board and then, when Brainerd came back online, became the Regional Admin for F&C. Before she knew it, Kathy had (mostly) stepped away from F&C and started dual paths – in registration, and, in a huge twist from the beginning, as assistant RE and then Regional Executive of Land O’ Lakes Region. When Brainerd opened back up, guess who was race chair? Yep, the wonderful “road-racing-isn’t-my-thing” Kathy.

Needless to say, they became invaluable members of LOL Region and the Club as a whole. Jim can still be found on a corner, though his role as flag chief means more often he’s bringing others into the fray and overseeing the activity. And though Kathy has stepped back as race chair and RE, she can still be found in registration and helping out where needed.

And they still work together on performance driving events in the Region.

They are proof that the excuse not to join in the fun is just that – an excuse.

“Many adults who have time to look at SCCA are in the middle of a successful career, so something new like this can seem intimidating because they are starting over as a beginner,” Kathy said. “And yet that is where the fun is. Because the people in SCCA are so cool and extremely encouraging that they quickly become friends and part of your extended family.”

Those still holding out hope should know that there is something, anything and everything for them to do.

“The best part about volunteering with SCCA is that there is a job that fits every behavior style,” Kathy said. “For detail-oriented people there’s timing and scoring or tech; for those who love people, registration is the place to be. Our Safety team has amazing people who are fire fighters, mechanics, medics and medical people in their “outside” life. People with the talent of organizing will love cheering committees, race chair or regional executive. And for people who love the adrenaline of racing, they will adore working on corners. Because as Jim so succinctly puts it, ‘it’s where the action is.’”