A View From The Podium: SCCA Roaring Back Into Action 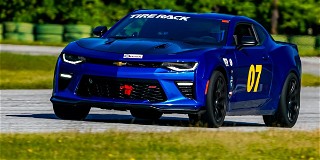 I saw track event after track event get cancelled. I saw friends and pros revert to iRacing, thinking it would “scratch the itch.” I went shopping for an iRacing setup — but that would eat into my tire budget, so I resisted the impulse. When would things get back to “normal”? When would I see track time again? Finally, an email of hope: the SCCA announced that the Time Trials National Tour event at Carolina Motorsports Park was a go. I ordered tires and convinced my fiancée that I could do both a family vacation in South Carolina and participate in the event over Memorial Day weekend. Pretty ambitious, but she went for it.

Luckily my Camaro SS 1LE has just enough room for two bags plus my track gear, which includes a tool box, jack, air compressor, and my helmet. The trip turned into a total of 1,800 miles over 5 days, from Kentucky to the South Carolina coast to see her family, to the track, back to the coast for one more day, and then a return home.

The trip reminded me why I bought the Camaro. It was perfectly comfy soaking up highway miles, made all the right noises running windows-down through the low country back roads, and it was right at home on the track.

After visiting with the family in Beaufort, SC, I headed out at the crack of dawn Saturday. I love mornings at the track. It was calm, with light summer fog and a hint of race car noises in the distance. As I pulled into the track things felt strangely normal. I signed a waiver, picked a spot in the paddock, parked, walked over to tech, checked in, said hello to some familiar faces, and got to the car ready. Granted, this was all done in a mask and every task was followed up by a healthy dose of hand sanitizer. Even from six feet away you could tell the SCCA staff members and participants were all smiles behind their masks. We were happy to be back at a race track, enjoying our cars. This all felt “normal.”

After removing all my gear from the car and setting my tire pressures I set off for practice. Having just driven over 700 miles and knowing I had to drive it home, conserving tires were at the top of mind. I left the car in “Track” mode which has the least intervention from the car’s PTM (Performance Track Management), and it is brilliant. This was, however, quickly turned off after a couple laps because the car felt too restricted. Five seconds after holding the traction control button down, the car I love dearly was free. Loads of mechanical grip, great balance, and it exits corners like it’s on bias plys. Ahh yes, this is bliss.

After the two practice sessions I reviewed the data from my APEX Pro and thought a 1:43-44 should be within reach because I did a 1:45.4 with ease. I was so wrong. The South Carolina heat came into play later and the tires I chose (Hankook RS4s) for this mission, although a favorite among endurance racers, are not as highly regarded among the time attack crowd.

When the first session for the Time Attack started, I went slower, not faster, than I’d managed in practice. That was okay because I ended the day with a healthy 1.5-second lead in my class (S2) and was fifth-quickest overall out of the 102 entrants.

As the day came to a close and the track went cold, in SCCA tradition, the social hour began. People gathered in small groups at a safe distance, enjoyed some catered BBQ in a neatly prepared to-go box, and socialized. Once again, thanks to our friends at the SCCA, things felt normal.

Day two was humbling. The lead I had going into the TrackCross event quickly narrowed. Sam Strano, a Solo national champion driving a brand new Camaro SS 1LE, had made the decision to return to the factory-stock Goodyears, no doubt thinking they’d handle the heat better. He was right. As I lined up behind him at the starting gates and watched his car launch, I thought “Oh boy.” I struggled to put down a clean run while Sam knocked out some spectacular times. His best was a 45.88 compared to my 47.22-second run.

Temperatures continued to rise going into the second Time Attack. We were given two attempts with three hot laps. I still had a half-second lead; I just needed to maintain my pace. Something in the high 1:45 or low 1:46 range.

First lap in 1:47.2; second lap in 1:47.07. Not enough. On the third lap I went for it. Looking at the predicted time on my APEX Pro, this was the lap I was looking for. I was having a riot of a time, the car wiggling on entry and exiting the corner with the proverbial dab of opposite lock. This is my happy place. Not best for setting flyers, but I was giggling like a little girl. As I approached the ‘kink’ at 135 mph, I thought it would be a good time to get serious. I breezed the brakes, turned in, used every inch of track, rolled back on the power, and told myself to brake just a hair later going into the tight hairpin…

Big mistake. I quickly realized I’d overcooked it. Hard on the brakes, down through the gears – 4-3-2 – I turned in, kissed the grass, put the car into a skid, and enjoyed the moment as much as I could. It was over. I hadn’t bested my time from earlier that day.

To end the event .026 seconds behind over the course of a weekend, two Time Attacks and the Track Cross, was hilarious. Sam and I had managed to beat the best times of the class above us. We finished 7th and 8th overall, respectively. Not bad for a pair of stock Camaros.

After 1,800 miles, the tires weren’t toast, the car never skipped a beat, and I had a blast. To be with a group of people, talk about cars, participate in something outside of a video conference, and drive–it felt great to do something normal.

Big “thanks” to the SCCA for putting on a wonderful event. I hope to see all those car peeps again soon. 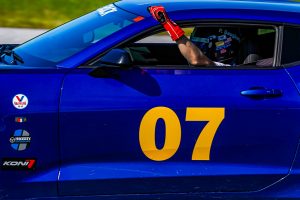