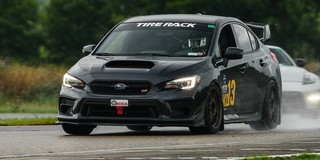 More than 100 competitors flocked to South Haven, MI this past weekend for the fifth round of the 2020 Tire Rack Time Trials National Tour Powered by Hagerty. Weather was a major story of the weekend, with heat and humidity on Saturday and thunderstorms on Sunday.

After rehydrating overnight from Saturday’s sun-beating, competitors got handed opposite conditions Sunday during TrackSprint when clouds moved in and lightning halted competition for about 45 minutes. After the delay, a mandatory lunch break/quiet hour and further storm delays, the afternoon Time Attack sessions were mixes of rain and semi-dry conditions.

Because of weather, the makeup of the top overall times was a bit more vaired than usual. In fifth overall, Kyle Herbst took his Prepped 3 Scion FR-S to total time of 4:32.265, getting edged out in both overall and class results by Max Rooney in a Honda Civic, by just 0.563 second. In third overall, Cody Franssen and his Ford Focus thrived in the damp conditions with a total time of 4:30.515. At the top of the standings, the top two drivers were separated by just 2.9 seconds after all three segments of competition. Joe Tharpe had the better conditions for TrackSprint runs, but James Barry capitalized on a drying track on Sunday afternoon in the final Time Attack session to take the overall top time at 4:20.868.

Top Novice honors went to Justin Wiener for taking his Volkswagen Golf to a Sport 4 win by 12.468 seconds. His Time Attack times were both faster than any other drivers in his class and he had the second fastest TrackSprint time.

The honors for Most Improved went to an Intermediate driver who started the weekend in the Novice group, but immediately made the grouping jump after the practice sessions. In the 16-driver Sport 6 class, Paul Darling sat in seventh after Saturday’s competition but came back strong on Sunday with the sixth fastest TrackSprint time and second fastest Sunday Time Attack time. The strong second-day effort pushed him to second place in class for the weekend.

Scott Beute, a regular RallyCross driver, brought his 1989 Ford Mustang RallyCross car to GingerMan and won the Breakthrough Performer award given for making a sizeable jump from another program area into SCCA Time Trials. Beute’s smile showed past his bandana-style mandatory face covering all weekend, especially when he felt right at home during the slick conditions on Sunday.

The Spirit of Time Trials Award—given to the participant at each event who most optimizes the true focus of “fun with cars”—went to Dallas Reed, who didn’t miss a single session, set fastest time in his very wet TrackSprint group and won the Unlimited 2 class; and that was all after thrashing on his car overnight to repair damage to his front aero and cooling system from an agricultural excursion to avoid a spinning car on Saturday.